Luxurious is the first word I’d use to describe my experience in Toronto at this year’s NEMLA both spatially as well as intellectually.  Taking place at the historic Royal York hotel, I had the opportunity to spend time in a location once visited by Queen Elizabeth and filled with oddly beautiful and yet disconcerting traces of empire.

The first session I attended, on the self-made man in the plays of George Bernard Shaw and Oscar Wilde (5.21), was held in the Quebec Room, which featured a full length mural on one wall of explorers discovering the city in their dug out canoes.  An appropriately theatrical setting for a pair of authors who toyed with treasured assumptions of the middle class British male.

Following this session I attended one focused on meeting the needs of our students with flexible teaching methods (6.6). Two of the presenters were interested in the use of fully online or blended courses.  Their experience with them sounded mixed.  One presenter on the panel focused on the support services available at her school for transitional students who had dropped out of high school prior to attending university or had not imagined themselves as being college material.  The final pair of presenters described attempts at their university in Sweden (Uppsala) to shift undergraduate teacher education with a new form of thesis research that emphasized projects that could be used in the classroom to teach students while at the same time encouraging teachers in training to reflect on their teaching practices.  My lack of knowledge of the Swedish language prevents me from telling you much about the content of the student theses examples the presenters passed around, but the images suggested that each project was interested in creating an active learning environment for students.  Two thumbs up in my book.

The presenters from Sweden had my particular attention in this session as they seem to have found an effective way to close the gap between theory and practice in their discipline.  This dilemma has always been one of interest to me, in part motivating the creation of this blog.  What good is knowledge when it is hidden in a format that only a small number of people can see and use?  These students were learning the most important thing a teacher can learn.  Make learning accessible in both literal and metaphorical terms.

From this session on flexible learning I went to a panel presentation on the use of digital tools for learning (7.3). One of my colleagues, Mary Hale, gave an excellent talk on her own suspicions about the digital turn and its limitations for the teaching of literature.  The other speakers showed methods of digital pedagogy they had used in the classroom, primarily to contextualize the materials being examined.  My favorite approach was the bio-regional one taken by Ken Cooper from SUNY Genesco who with the help of librarian Elizabeth Argentiari created interactive maps and web pages (using OMEKA) that documented the layers of history underlying cultural representations of the Genesee valley.  I’ve always been a regionalist at heart and love projects that make students go outside into the landscape (rural or urban) and learn from the people and the land in addition to their textbooks.

One comment on the location for this panel, the Banff Room had clearly been a guest room at some point and was turned into a makeshift presentation space.  The old, yellow, peeling, and musty wall paper couldn’t help but remind me of Charlotte Perkins Gilman’s story “The Yellow Wallpaper.”  Hands down this was the creepiest conference room I’ve ever been in!  But I guess the nineteenth-century feel was appropriate for a nineteenth-century literature and culture panel.

After that stimulating session on the use of digital technology,  I took a break to eat, going outside to buy a hot dog from a surly street food vendor.  For a moment I thought I was in New York.  Then I went back inside the hotel for a panel on postwar Italian representations of World War II (9.2).  To my regret, the first presenter, Daniele Pipitone, was unable to attend the conference.  I was very much looking forward to learning more about the imagery of the war published by Italian popular magazines in its aftermath.  The three presenters I did have the pleasure to hear were very engaging.  I especially enjoyed Silvia Ross’s paper on the lack of Italians in the landscape of Ondaatje’s novel The English Patient and Nicole’s lively discussion of counter-factual history in relation to Quentin Tarantino’s film Inglourious Basterds.

The only sour note in the series of panels I attended greeted me on Saturday morning at the round table on adjunct faculty (10.1).  I was late attending this panel and only caught the last speaker who delivered a lively presentation of what he felt were the benefits of being a part-time faculty member.  Not long before he finished speaking a woman sat down in the back row next to me.  We started the discussion portion of the round table and someone asked a question about the gender and racial breakdown of adjunct faculty.  I muttered under my breath “the statistics are pretty clear.”  And they are.  Women and minorities make up the largest number of adjunct faculty.

The woman next to me glowered at me and spoke in a voice between a shout and a whisper:  “What statistics?  You mean the AAUP ones?  Those are skewed.  Don’t you know who funded them?”  She then proceeded to berate me for believing these statistics and began to cause a distraction for the rest of the people in the room.

Embarrassed, I tried to disengage from her and nearly left the room.  I stayed and watched her continue to hijack the discussion, telling everyone in the room to “follow the money” and leave the profession.  Eventually the room regained its equilibrium, but the storm blown in by her bitterness put a chill over the rest of the conversation.  I left as soon as a I could after that and went to another panel.  A sad end for me to what appeared to have been an otherwise positive session.

At every conference I attend, I make a habit of going to a panel on something I know nothing about.  This year I decided to attend a round table session on 21st Century Tunisian Women Authors (11.14).  The first two presenters spoke solely in French, leaving me to struggle through the remnants of my knowledge of that language learned many years ago as a middle school student in Vermont.  Luckily they had slides.  I could read and comprehend those easier than their speech, which I struggled to slow down in my head and translate.  I must say, however, the struggle was fun and reminded me of why I began to engage in scholarship in the first place, for the mental challenge.  The last presenter and much of the discussion was in English.  I was particularly interested in what the audience had to say about the role of NGO’s (non-governmental organizations) in the lives of Tunisian women. Trying to help them achieve some measure of autonomy in their lives, many of these NGO’s were acting like 21st century colonizers, trying to impose a model of female autonomy on these women that did not respect their cultural heritage.  I left that session wanting to go back and study French if for no other reason than to read the works of these brave women trying to find their voice in a troubled land.

I left this realm of unfamiliar people and language for a more comfortable space in the next session on regionalist writing in the nineteenth-century United States (12.23).  All four panelists were excellent.  The one that caught my attention most, however, was Florian Freitag’s talk on local color fiction about New Orleans in Scribner’s and other monthly periodicals from the late nineteenth-century.  In part my interest was due to his explicit use of the periodical studies method, which is becoming far too rare in contemporary scholarship.  Florian is attempting to contextualize the regionalist narratives he is examining within the magazine as a whole, considering both its publishers and their intended audience.  I look forward to reading whatever publications develop from his research.

The last panel I attended was a round table on interdisciplinarity and the future of the humanities (13.24).  All of us in the room bounced through so many different topics that I can’t possibly cover them all here.  Suffice to say that there seemed to be a common thread throughout the discussion that the humanities are worth fighting for and that we as humanities scholars need to do a better job of promoting ourselves and our work.  A special shout out is in order to Jean-Paul Boudreau, Dean of Arts at Ryerson University in Toronto, one of our local hosts, for sitting on the panel and reminding us that we should approach our Deans with new ideas and instead of fearing rejection find new ways to argue our case.  Proof yet again, that Rhetoric is the mother discipline of all others.  ; )

A plane back to Chicago awaited me after that panel, but I would be remiss in not mentioning the two AMAZING keynote addresses.  The first was on Thursday where M. NourbeSe Philip and Madeleine Stratford brought their poetry to life for us.  Similar life was breathed into the bard on Friday night as Christopher Innes and Brigitte Bogar shared the many adaptations of Shakespeare’s Romeo and Juliet with the audience.  Brigitte sang musical adaptations of this classic story of ill-fated love and even shared the stage on two occasions with a ballet dancer who demonstrated two dances used to portray the character of Juliet.

I started this blog post with the word luxurious, using it to describe the setting of NEMLA 2015, but the intellectual aspect of the word has (I find) gotten lost somewhere in my expansive description of the sessions I attended.  What made this conference luxurious intellectually for me was that I was able to attend the conference without chairing a panel or presenting a paper.  I was simply a tourist in a land of fascinating ideas.  This won’t be the case for me next year in Hartford as I left Toronto the newly elected Director of American literature.  NEMLA 2016 is likely to be a busy event for me as I try to fill the large shoes of my predecessor, Jennifer Harris, and the amazing conference put together by the NEMLA board this year in Canada.  A daunting task, but I’m up for the challenge.  See you all in the Charter Oak State! 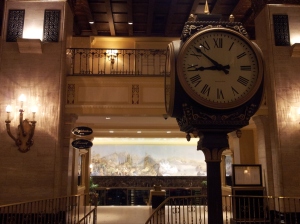 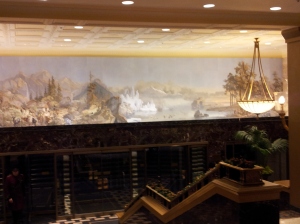 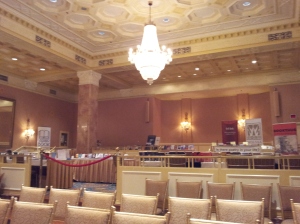 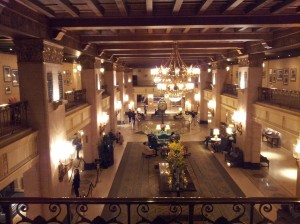 This entry was posted on May 4, 2015, 6:56 pm and is filed under Updates. You can follow any responses to this entry through RSS 2.0. Both comments and pings are currently closed.