Greetings from Chicago!  It’s starting to look and feel like winter a lot more with each passing day.  Colorful hats and scarves are coming out of storage and adding to the beautiful colors of the fall foliage on campus.  Here’s a picture I took this weekend of the signs of fall slowly turning to winter at UIC.  Hopefully you’ve had a least a few sunny days wherever you are. 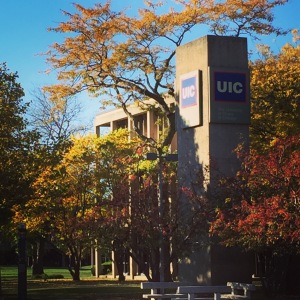 In my last blog post I began to discuss issues related to teaching with technology in the field of American Literature.  This month I’d like to move from blogs, a fairly well-established medium at this point, to the newer and more contested form of micro-blogging that is best exemplified by Twitter.

What can you do in 140 characters or less?  This was the question I set out to answer in August of 2011 when I signed up for Twitter.  Here is a summary of what I learned:

Let me start with the first of these observations.  The reason I say that it matters who you follow is that this decision dictates your Twitter “feed.”  When you “follow” someone on Twitter, you tell the service to send you everything that person posts.  This might include photos, things they have written, or materials they forward to you from other people (known in Twitter lingo as “retweets”).  If you plan to use your Twitter account primarily for academic purposes, it makes sense to follow faculty whose work you admire, programs that are producing materials you find useful to your own work, or institutions that contain primary sources you frequently use.  You can also add the accounts of colleagues in other fields and keep up with research happening in areas of study not directly related to your own.  When you choose the people you follow carefully, your Twitter feed ends up looking like a newsletter (updated each day) or an interactive RSS list.  If the headline grabs your attention, you can then click on it and learn more about new research, job changes, grant and positions available, etc.  Most complaints I’ve heard about Twitter feeds involve users who want their account to be simultaneously personal and professional.  You can try to do this, but (unlike on Facebook) I don’t think it will work.  Tweets from the National Archives and faculty on United States Civil War era culture don’t mesh well with the latest pronouncements from celebrity land.  Save the Kardashians for a personal Twitter feed or for scholars in contemporary pop culture.

Focusing on my next observation, writing in 140 characters or less is an exercise in precision.  You need to eliminate all unnecessary words as Twitter won’t let you send out a message that is longer than its software allows.  (This might change in the near future, but for the moment the limitation stands.  More on the shift in Twitter’s function later.)  I have used Twitter in my college composition classrooms as a way to teach summary to students.  It can also be a useful grammar teaching tool if you force people to Tweet grammatically correct statements with no text speak or emojis.  Of course, this haiku like brevity also leaves plenty of room for misunderstanding.  I learned this the hard way not long after I joined Twitter.  My assumption was that hardly anyone would read my tweets.  I am not famous after all, just a Lecturer in English at a midwest regional university.  Following this logic, I vented my frustration with the Modern Language Association (MLA) on Twitter.  Imagine my surprise when the Executive Director of the MLA (Rosemary Feal) responded to my tweet.  Not only did she respond, but she was hurt by the critique contained in my message.  After trying to explain myself via multiple haikus (a.k.a. tweets), I gave up and moved over to a new medium (a blog post) that seemed better suited to the complex nature of our disagreement.

My experience with the knee-jerk nature of disagreement on Twitter is not unusual.  What is unusual is the positive outcome to the interaction.  Many have begun to use the medium as a way to bully others into silence.  Although any tool can be used for a similar purpose, including the telephone, Twitter seems particularly vulnerable to this type of manipulation.  Twitter, as many analysts have claimed, is a tool for “amplification,” getting one’s message out to the broadest audience possible.  What gets amplified sometimes fills me with disgust.

Getting into a Twitter fight so early in my use of the medium has shaped my usage of it since.  Someone who has studied the medium much closer than I have has observed that there are typically three types of people on Twitter:  the lurkers, the reposters, and the networkers  I began as a lurker, simply reading the tweets of others.  From there I attempted to be a networker, only to be shot down for speaking up.  Since that moment, I have been mostly a reposter.  A quick glance at my Twitter feed will show that I don’t write much content on Twitter.  I repost the materials of others that I think might be useful or interesting to other people.  I also post links to my blog, which is where I do most of my talking.  Twitter (as I use it now) amplifies the works of others and also publicizes my own.

This leads me to my final point.  Just as I thought that blogs would help me to network with scholars I could never meet in person, I also thought that Twitter would help connect me to scholars whose work I admired from afar but would never meet at an academic conference.  That hope didn’t pan out.  As with blogs, I learned that face to face networks tend to have a greater impact that virtual ones.  It was only in a few instances where virtual networking proved to be relevant and lasting.  Mostly it’s like throwing darts in a dark room.  Twitter is a good supplement to old fashioned networking, but it is a supplement rather than a replacement.  Not great news, I’m afraid, for adjunct faculty.

By way of conclusion, I’d like to discuss the issue of how Twitter has changed since I joined in 2011.  Twitter remains a free service, but went public in 2013 and now trades on the New York Stock Exchange.  As with Facebook, the decision to become a publicly traded company has altered the nature of the medium.  Ads and “promoted tweets” now flood my feed and often drown out the ones that are more relevant to me.  A new “moments” feature has also been added to the mobile version that sends me the top news stories of the day in a feed format that looks a lot like Facebook.  There has even been discussion about changing the 140 character limit, allowing longer messages.  In a struggle to be profitable, Twitter is killing off what made the service unique in the first place.

Twitter has become less a newsletter and more of a billboard.  At the same time, the aggression directed at some of the most vocal communicators on Twitter has shut down meaningful discussion through the medium.  Legal attention to faculty tweets (particularly those of Steven Salaita) has also had a similar silencing effect.  What began for me as a virtual seminar, teaching me enormous amounts of information on what came to be known as Digital Humanities, is now just another news aggregator.

I hate to end on a down note, but I have to be honest about my experience with this particular tool.  Keep in mind, however, that this is just my experience of Twitter.  It’s still free.  Try it out.  Discover for yourself how or if it makes sense to communicate your scholarship in 140 characters or less.

Next month I’m going to discuss the pros and cons of using electronic texts in the classroom, a prelude to the topic I’ll be presenting in Hartford.  From there I think it makes sense for us to consider our vulnerability as scholars entering the market of educational technology.

This entry was posted on October 30, 2015, 11:34 am and is filed under Updates. You can follow any responses to this entry through RSS 2.0. Both comments and pings are currently closed.