Out on the Crab Grass Frontier

Posted by johnacaseyjr in Updates, Urban Studies on March 27, 2019

Today is my first full day back home in Chicago after traveling to NeMLA 19 in Washington, D.C. Or rather National Harbor, a strange outpost of D.C. that I’ll be talking about more momentarily. My wife Edna joined me this time and we enjoyed ourselves immensely in between my conferencing. We also stayed an extra day so that we could tour some of the nation’s capital. We came at a good time. The season is just starting to turn and we could see blossoms on the trees. Washington, D.C. is a very beautiful city in the spring.

NeMLA was enjoyable as always. A nice mixture of scholarship from all over the world. This year, perhaps because of the conference location, I found myself drawn to panels on space, place, and representation. Two questions came to mind from the panels I attended:

Testimony (at least in the way I was taught it as an undergraduate) was an aesthetic derived from the Holocaust. So many authors, among them Primo Levi and Elie Wiesel, sought to create a record for those without a voice, for those that might have died forgotten if not for the writing of the ones who survived. Authors of various nations, races, and ethnicities had done similar things before but never on the scale encouraged in the post-Holocaust era.

Testimony is so much a part of the way we read and write that I imagine many of us aren’t even aware of its presence in our daily experience of culture. For me it is often only visible when it is done poorly like the Maxwell Street murals and sculptures that were erected by developers to commemorate a neighborhood bulldozed for urban renewal and the expansion of the campus I work at–UIC. Another chapter in that institution’s long history of being on the wrong side of urban renewal.

I don’t have a good answer to the question of why testimony is so prevalent in literature and culture. My suspicion is that it serves a necessary function in contemporary culture of acknowledging the suffering of others while doing little to alleviate it. Representation as a substitute for action. I am still struck by how easy it has become for those in power to appropriate its logic to their own ends. I need to read more on this to come to a better understanding.

The second question leads me back to the Crab Grass Frontier upon which the conference was situated this year. National Harbor is clearly a planned community in the worst sense of the word. When Edna and I got off the plane at National Airport, we took a cab to National Harbor. Passing through Alexandria, VA we saw the massive mixed zoning apartment complexes (a cookie-cutter New Urbanism) going up around the Long Bridge into D.C. (interstate 395). We then went through the historic center of Alexandria and passed through a more beat up and workaday south portion of town that looked a lot like the redeveloped sections of Chicago’s near west side. Then we crossed the Woodrow Wilson Bridge (interstate 495) and exited near an MGM casino and outlet mall. We next progressed down a road way that led us into the planned community of National Harbor.

National Harbor had all the hallmarks of the New Urbanism we had seen in the developments on the north side of Alexandria. The same mix of brick, glass, and steel with asymmetrical insets to make the facades less bland and create buildings that look a little like transformers that have failed to transform. Narrow streets with brick crosswalks. Old time street lights. Statuary and benches. Parking garages discretely tucked in to the edges of this faux-downtown with stores on the lower level and apartments and condos on upper floors.

I’ve seen a lot of badly planned New Urbanist communities in the United States, but this one had me particularly puzzled and intrigued. The roadway served to isolate the area more effectively from its environs than any wall or moat could have done. I imagine you could have figured out a way to walk there if you wanted to, but the main way in and out was by car. This created massive traffic congestion in a street grid that was designed to mimic that of a nineteenth or early-twentieth-century US city dependent on public transport to get people around.

I was also struck by the unfinished quality of the design. A three block walk to the north and east led to a green field filled with construction material waiting to be used. A street grid and public infrastructure such as lights, water, and sewer hadn’t yet been installed. But there were some apartments (or perhaps condos) off to the side that attempted to mimic a version of Parisian design with their mansard roofs. In the photo below, you can see the empty land and the beginnings of a new residential building (still in Tyvek) as well as the existing suburban middle class houses of Oxon Hill, MD, the area National Harbor sits in, off in the distance. 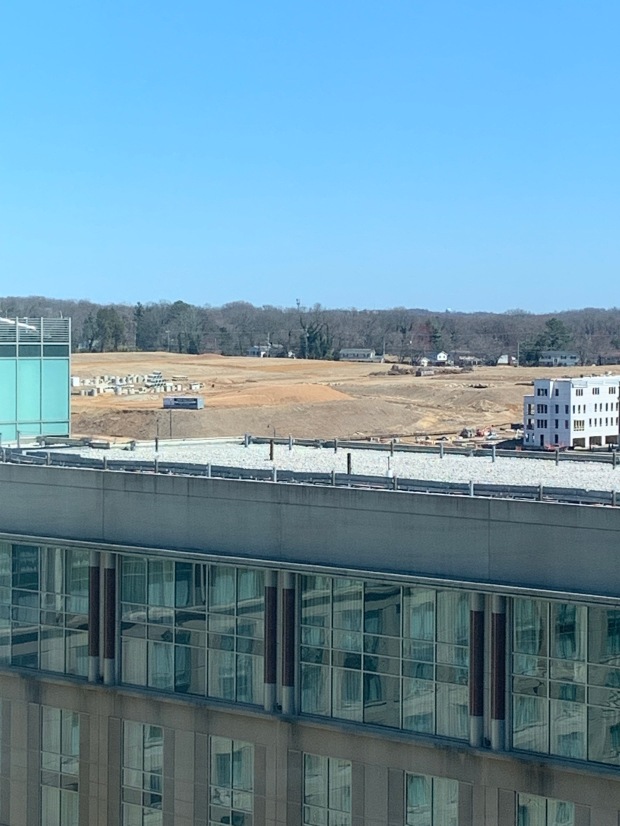 Unfinished Section of National Harbor. Photo by the Author. March 22, 2019.

National Harbor sits on the land, irrespective of context, ignoring not only the more recent past of Oxon Hill and its surroundings but the more distant past of the land it sits on, which was owned by slave holding plantation owners. Just up the road from National Harbor at the Tangier Outlet Mall lies the land that once was Salubria Plantation, which became known due to the poisoning of the master’s children by one of his slaves. Yet National Harbor tries to market a vision of the past to its users. A past that is cobbled together like Frankenstein’s monster and mostly inappropriate to the setting. A past that highlights national mythology surrounding WWII and the mid-twentieth-century US city blended with strange references to the tidewater history of the nineteenth century. That house in the photo below mimics a small plantation home and is actually inside the hotel I was staying at in a giant glass domed atrium. They sell clothing and jewelry inside. 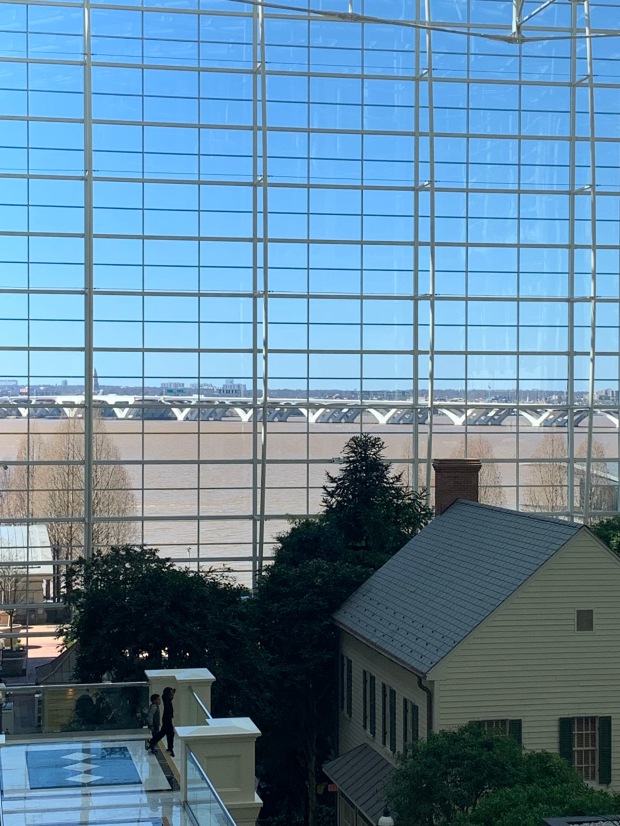 Normally this uninspired design doesn’t bother me. I see it so often in Chicago, it hardly registers on most days. However, being at an academic conference, I was in a mindset to analyze carefully and document what I learned through that analysis. What I saw was what several presenters at the Opening and Vanishing Cities panels referred to as ‘retro-topia.’ A model for a new city based on a misunderstanding of the past. This is not a harmless act for many reasons.

Among the most salient that I can think of now is that retro-topia violates the ethos of testimony or (even worse) commodifies it. Think of the slave woman Judah testifying to shoppers as Tangier Outlets of the horrors of slavery and her resistance to her master at Salubria Plantation before they go to buy an overpriced handbag.

It also contributes to our growing inability as a culture to imagine a future. We often talk about utopia as if it were something limited to fiction and film. Culture, however, includes the built environment and the narratives that developers try to sell to us as well as our resistances to that narrative.

If all we see is a stale New Urbanism, all we get is retro-topia. It’s no accident that earlier versions of utopia in fiction looked a lot like Corbusier’s vision of the modern city. That was what many people were living in during the 1950s and 60s if they lived in an urban space.

To get to something better, literary scholars need to better understand urban planning and its impact on culture. We need to analyze the built environment more carefully like we would a novel or film. People (for better or worse) read the landscape more than they read books. Let them see a narrative that inspires something better rather than lulling them into a dreamy past that never existed except in the mind of a real estate developer and (perhaps) an under-employed history major trying to earn a buck. 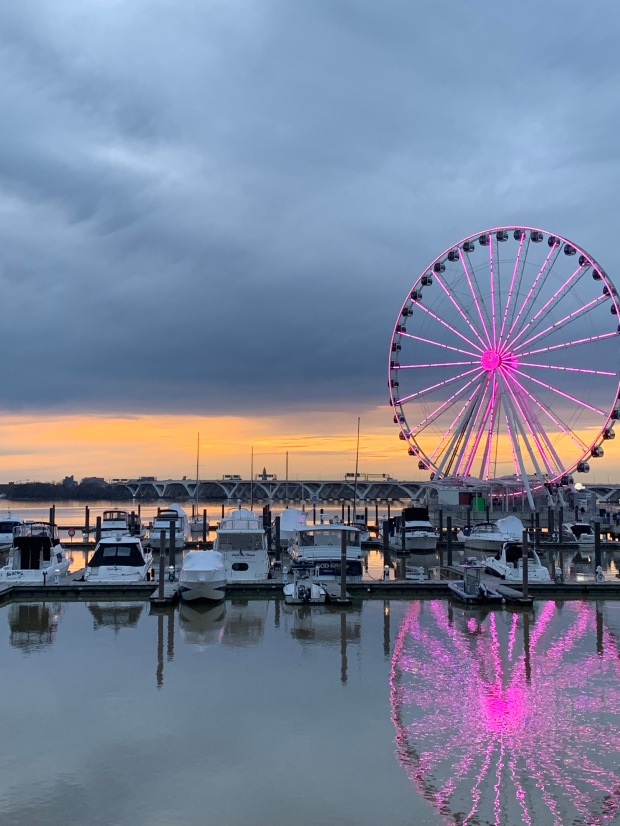 And now I leave you with a ferris wheel, at the end of a board walk, overlooking the sunset. The perfect setting for nostalgia. Precisely what the developer, our urban planning novelist, had in mind.